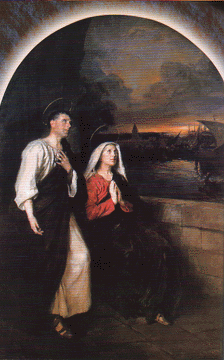 Today, May 4, is the feast day of St. Augustine's mother, St. Monica. Here is an excerpt from her online biography published on the EWTN website:

Augustine was twenty-nine and a successful teacher when he decided to go to Rome. Monica opposed the move, fearing that his conversion would be indefinitely postponed. Her son went on with his plan, and set off with his young mistress and little son Adeodatus for the seaport. His mother followed him there, and when he saw that she intended to accompany him, he outwitted her by a deception as to the time of sailing. He embarked while she was spending the night praying in a church. Although this grieved her deeply, Monica was still not discouraged about her wayward son, for she continued on to Rome. The ship on which she took passage was tossed about by a storm, and she cheered those on board by her serene confidence in God's mercy. On reaching Rome, Monica learned that her son had gone to Milan. There he had come under the influence of the great Bishop Ambrose. When his mother finally found him in the northern city, he had given up Manichaeism, although he was not yet a Christian. Monica's friendship with Ambrose is worth touching upon. She apparently made a friend of this eminent churchman and he entertained the highest opinion of her. Here in Milan, as at home in North Africa, Monica was foremost among the women in all charitable works, and also in her devotions. The bishop, however, persuaded her to give up some of the customs practiced by the Christians of her homeland, for they were derived from ancient pagan rites; carrying food and wine to the tombs of the martyrs was one of the customs which Monica now relinquished.

The joyous day of Augustine's conversion, which will be fully described in the life of that saint, came at last. For some time his mother had been trying to end her son's illicit relationship of so many years' standing. She hoped to find a suitable bride for him, but after his mistress went back to Africa Augustine informed her that he would now adopt a celibate life and devote himself to God's service. The Confessions give us glimpses of the period of preparation preceding his baptism. The time was passed in the house of a friend, where a close-knit group, consisting of his mother, brother, Adeodatus, and a few companions occupied themselves with discussions of religion and philosophy. At Easter, when Bishop Ambrose baptized Augustine, his mother's cup was full to overflowing.

You can read the whole thing here.
Posted by Francis Beckwith at Monday, May 04, 2009

Francis, I thought St. Monica's feast day was August 27th, although we can certainly celebrate her life today, too.

Apparently, the Church changed it from May 4 to August 27 so that I can be the day before her son's St. Augustine. I am honoring the original feast day. You can read more about it here: http://thewindowshowsitall.blogspot.com/2008/08/feast-of-st-monicaaugust-27.html

It is also the feast day of St. Florian, Patron Saint of firefighters and Fr. Karol Wojtyla (Pope John Paul the Great).