July 11, the Feast of St. Benedict, and my wedding anniversary 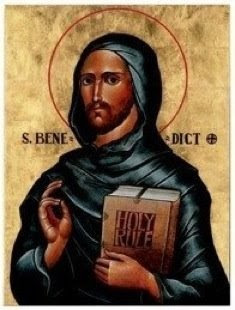 Today, July 11, is the feast of St. Benedict. It also happens to be my 22nd wedding anniversary. In my book, Return to Rome: Confessions of An Evangelical Catholic, I briefly discuss the significance of this day in the life of my wife, Frankie, and me: "While in Vegas [during Spring Break, 1985] I became reacquainted with Frankie Dickerson (my future wife), the sister of my friend Lexi Weigand. Lexi’s husband Mark was instrumental in helping to lead Frankie to Christ at Calvary Chapel Costa Mesa on July 11, 1982. (Coincidentally or providentially, July 11 is our wedding anniversary as well as the feast day of St. Benedict, the namesake of the Pope under whose papacy Frankie joined, and I returned to, the Catholic Church)." (p. 56)
Posted by Francis Beckwith at Saturday, July 11, 2009

Congratulations and Happy Anniversary to you and Frankie!