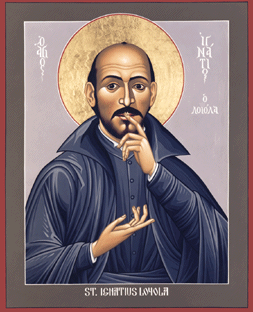 The founder of the Jesuits was on his way to military fame and fortune when a cannon ball shattered his leg. Because there were no books of romance on hand during his convalescence, he whiled away the time reading a life of Christ and lives of the saints. His conscience was deeply touched, and a long, painful turning to Christ began. Having seen the Mother of God in a vision, he made a pilgrimage to her shrine at Montserrat (near Barcelona). He remained for almost a year at nearby Manresa, sometimes with the Dominicans, sometimes in a pauper’s hospice, often in a cave in the hills praying. After a period of great peace of mind, he went through a harrowing trial of scruples. There was no comfort in anything—prayer, fasting, sacraments, penance. At length, his peace of mind returned.

You can read the rest here. The Catholic Encyclopedia also has an entry on St. Ignatius of Loyola, which may be found here. I am proud to say that I earned two of my graduate degrees at a Jesuit Institution, Fordham University: PhD in philosophy (February 1989), and an MA in philosophy (May 1986)
Posted by Francis Beckwith at Friday, July 31, 2009