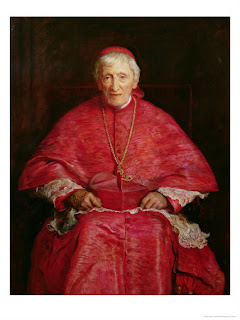 This, from the Cardinal Newman Society:

The Congregation for the Causes of Saints on Friday, July 3, announced that Pope Benedict has approved as miraculous the healing of Deacon Jack Sullivan, who attributed his cure from a crippling spinal disorder to the intercession of Cardinal Newman. In April, 2008 doctors assigned to scrutinize the healing said that science offers no explanation for Deacon Sullivan’s cure on the Feast of the Assumption in 2001.

The Cardinal Newman Society (CNS) gives thanks to God for the approved miracle of our patron, John Henry Cardinal Newman. We urge Catholics worldwide to pray for his intercession, especially in the ongoing renewal of Catholic higher education.

Newman, who is the patron of CNS, was a great defender of the principle that the academic nature of a university is strengthened by a strong Catholic foundation and adherence to the teachings of the Church.

InIdea of a University, Cardinal Newman argued that the university is dedicated to the search and transmission of all truth, including the fundamental truths revealed by Christ through His Church. Newman's thought and Pope John Paul II's 1990 Apostolic Constitution on Catholic higher education, Ex corde Ecclesiae, guide the efforts of The Cardinal Newman Society to promote the renewal of Catholic campuses in fidelity to the Magisterium of the Church.

Earlier this year, in anticipation of the 208th anniversary of Cardinal Newman’s birth, The Cardinal Newman Society’s Center for the Study of Catholic Higher Education launched the “Newman Commemorative Paper Series” with an essay by Father McCloskey. The Center also has essays about Cardinal Newman’s thoughts by the late Cardinal Avery Dulles and renowned Newman expert Father Ian Ker. These essays are available at CatholicHigherEd.org.