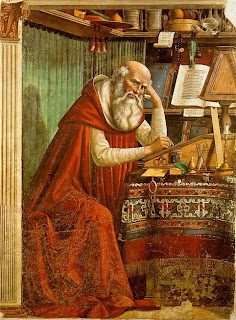 Here's an excerpt from the Catholic Encyclopedis article on St. Jerome:

St. Jerome owes his place in the history of exegetical studies chiefly to his revisions and translations of the Bible. Until about 391-2, he considered the Septuagint translation as inspired. But the progress of his Hebraistic studies and his intercourse with the rabbis made him give up that idea, and he recognized as inspired the original text only. It was about this period that he undertook the translation of the Old Testament from the Hebrew. But he went too far in his reaction against the ideas of his time, and is open to reproach for not having sufficiently appreciated the Septuagint. This latter version was made from a much older, and at times much purer, Hebrew text than the one in use at the end of the fourth century. Hence the necessity of taking the Septuagint into consideration in any attempt to restore the text of the Old Testament. With this exception we must admit the excellence of the translation made by St. Jerome.

His commentaries represent a vast amount of work but of very unequal value. Very often he worked exceedingly rapidly; besides, he considered a commentary a work of compilation, and his chief care was to accumulate the interpretations of his predecessors, rather than to pass judgment on them. The "Quaestiones hebraicae in Genesim" is one of his best works. It is a philological inquiry concerning the original text. It is to be regretted that he was unable to continue, as had been his intention, a style of work entirely new at the time. Although he often asserted his desire to avoid excessive allegory, his efforts in that respect were far from successful, and in later years he was ashamed of some of his earlier allegorical explanations. He himself says that he had recourse to the allegorical meaning only when unable to discover the literal meaning. His treatise, "De Interpretatione nominum hebraicorum", is but a collection of mystical and symbolical meanings.

You can read the whole thing here.
Posted by Francis Beckwith at Wednesday, September 30, 2009