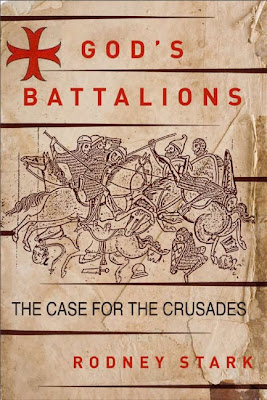 My Baylor colleague, Rodney Stark, has just published a new book that offers an historical account of The Crusades and the Christian Church's historical relationship with Islam that should serve as a corrective to the frequent misuse of The Crusades in inter-religious dialogue as well as in the writings of authors like Richard Dawkins and Christopher Hitchens. Entitled God's Battalions: The Case for the Crusades [(Harper One, 2009], it was just reviewed over at The Catholic Thing Blog by Brad Miner. He writes:

Pray for me, folks, because I’m nostalgic for the Crusades.

Of course a twenty-first-century fellow can’t really be nostalgic for the eleventh or twelfth centuries, since nostalgia properly means severe homesickness, a yearning for familiar conditions from a prior period in our own lives. But there’s a secondary meaning: a wistful longing for a lost dominion. I’m idealistically attracted – as perhaps I should be – to the qualities of the knight, such as honor and bravery, and incautiously suppose – as no doubt I shouldn’t – that these qualities arose in a time and in places congenial to virtue. Chivalry! The Crusades! Something to fight for! Where the heck are my sword and my steed?

If the Crusades ever evoked appreciation – and they did – that particular lost dominion took a pretty serious blow on September 16, 2001 when in an Oval Office speech George W. Bush said: “This crusade, this war on terrorism is gonna take awhile.” The press swooned and Muslim sensibilities were outraged, encouraged perhaps by the media swarf. That’s a mere eight years ago, but the Crusades – their reputation already foundering in the multicultural chop – have all but sunk into the black hole of politically correct disdain. Even “Kingdom of Heaven,” Ridley Scott’s 2005 film about the Third Crusade, failed to make the great expedition very interesting. Many saw the film as a scolding commentary on Crusader Bush.

Enter historian Rodney Stark, riding my missing horse. His new book, God’s Battalions, is actually subtitled: The Case for the Crusades. And he makes the case! With admirable frankness and flair. He writes that the prevailing wisdom about the Crusades may indeed be that “an expansionist, imperialistic Christendom brutalized, looted, and colonized a tolerant and peaceful Islam,” but Stark’s next words are telling:

Professor Stark (Baylor University) emphasizes that the onset of hostilities between Christians and Muslims long pre-dated the Crusades. We too often forget that for six centuries after the Resurrection there was no Islam and much of northern Africa and what we now call the Middle East were Christian or pagan. But from the beginning of Muhammad’s public life – and especially after his death in 632 – his followers began making war on just about everybody, and within a century Islam had swallowed up most of that eastern territory and by 1095 – when the First Crusade left Europe for the Holy Land – the Byzantine Empire, Christendom’s eastern bastion, was in grave peril of conquest, which is why the emperor, Alexius Comnenus, wrote to Pope Urban II telling horror stories about Muslim atrocities against Christians and begging for military aid from Europe.

Islam, according to the historical record as Stark presents it, is a “religion of peace” mostly in the sense that it seeks to subdue and unify the people it conquers. True, the Qur’an forbids forced conversions, but in practice this has meant that “subject peoples were ‘free to choose’ conversion as an alternative to death or enslavement.” And to be fair, in some places – Spain (Al-Andalus) is a good example – Christians and Jews might live in relative peace, since the Muslim ruling class sequestered itself, paying little attention to subject people (dhimmis) except at tax time. To many in southern and eastern Europe, Muslim expansion began to seem all but unstoppable . . . until it stopped. Christians fought back. Constantinople was able to hold off its invaders in several successful sea battles. Charles Martel defeated a Muslim force in what would become France. The Reconquista began in Spain, and in 1094 the legendary El Cid defeated an Islamic army at Valencia. Islam was in retreat.

With the letter from Alexius in hand, Urban II exhorted Christians to come to the aid of their besieged and battered co-religionists in the east, and 35,000 answered the call.

Stark not only busts the myth of Western imperialism, he also challenges the received wisdom that Islamic culture was superior to and actually transformed European culture. This impression, he writes, is at best an illusion: “To the extent that Arab elites acquired a sophisticated culture, they learned it from their subject peoples.”

Most important of all Stark’s contrarian conclusions is that many – perhaps most, certainly not all – crusaders marched to Jerusalem in a spirit of penitential piety and not in search of loot or earthly glory. That said, Stark’s tale spares none of the seedier subplots of the story: the anti-Semitism, the slaughter, the staggering expense. And in conformity to his counter-intuitive perspective, Stark’s portrait of Richard the Lionheart is actually quite positive. Richard has lately been portrayed as a war-mongering blunderer, but God’s Battalions shows him to be a courageous and cagey leader who bested Saladin and failed to re-take Jerusalem only because he knew the cost of holding it would be too great.

That history has tended to judge the crusaders unkindly derives less from their actual motives and achievements than from Western modernity’s faithlessness and incessant hand-wringing over our own cultural triumphs. No good deed goes unpunished.

I am reading this book as we speak. So far so good!

Interesting. Does it show how Islam attacked Byzantine and Persia first in aggressive war; and does it talk about and provide facts about the often repeated statement in many histories of this period (600s-900s AD) that
the non-Chalcedonian monophysite (Miaphysite) areas ( Egypt, Armenia, Syria "welcomed the Arab Muslims as liberators from their Byzantine masters" ??

I was disappointed with Philip Jenkins' The Lost History of Christianity, as it seemed to at the end of the day treat Islam with typical "political correctness".

with all sincerity,
Ken T.