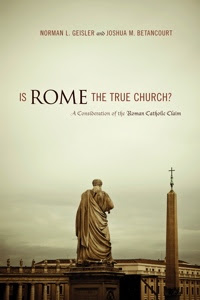 One of my Baylor philosophy PhD students brought to my attention today that Norman Geisler's co-author of Is Rome the True Church? (Crossway Books, 2008), Joshua Betancourt, has converted to Catholicism! This has been confirmed by Doug Beaumont, a friend of Mr. Betancourt's. Here's what Doug writes on his blog (emphasis mine):

I saw the website (www.catholicscomehome.org). This represents a fairly major move going on in this generation. There are books, TV shows, websites, etc. all focused on those who have left and returned to the RC church. There are also Protestants converting to Roman Catholicism. One chapter in the book Is Rome the True Church? is dedicated to why this is happening. Interestingly, the book’s co-author, a friend of mine named Joshua Betancourt, converted to Roman Catholicism shortly after the book was published! Nor is he the only one. I know several people, whose minds I highly respect, who have made the same decision (Francis Beckwith, J. Budziszewski, to name some famous recent converts). Of course, the opposite is happening too – lots of RC’s are converting to some form of Protestant-Evangelicalism.

Email ThisBlogThis!Share to TwitterShare to FacebookShare to Pinterest
Labels: Protestantism

That is great news indeed! This is the usual result when people really examine history objectively. There are many people who start out to prove the Catholic Church wrong who eventually embrace her! Those who have that fire to actually set out on a genuine mission to find the truth, will find it. Another great example, and another conversion story that James White and his henchmen will attack, no doubt! :)

This just proves that he was never saved ;)

Seriously though, If a protestant can take off their sola scriptura tinted glasses for a time, a window of opportunity is created. I look forward to hearing his story, but hope and pray he doesn't experience the blogospheric abuse from our brethren that you experienced and continue to weather. Dr. Beckwith

This is simply a hoot to me! I picked that book up a while back, just to see if it raised any new arguments, and it didn't... nor did it really have much to say (sorry Gents) that had any decent concrete conclusions.

On another note Dr. Beckwith, I wanted to encourage you to continue to follow Christ to the full despite the flack you have received. I am ashamed at the way people act sometimes. May God grant you the strength, peace, and courage to continue on.

I myself have been looking into these things for about 3 years. I have heavily considered the Catholic Faith. I have spent much time in the Early Church Fathers and then some secondary reading mostly from the Catholic angle.

I have just recently decided to hear the Orthodox secondary sources on this subject. My desire (as I know is yours) is to glorify Christ with wholehearted obedience. It is good and right to praise Him and to do as He says.

I uplift you in prayer and thanksgiving. May Christ truly sustain you!

That is fantastic news!

Good deal! Thank you for the info.

I've also added you to my blogroll.

He shows great humility in becoming Catholic, especially so close in time after publishing a book about why the Catholic Church isn't what she claims. God bless him.

"lots of RC’s are converting to some form of Protestant-Evangelicalism." is a bit of a cop out. I can hardly think of a well-known Catholic at a similar level previously faithful to the Church that has become a Protestant. The Miami priest that got caught in scandal and became Episcopal hardly counts.

Sure lots of Catholics who don't now their faith are quite attracted to Protestantism and many Protestant churches have a large number of ex Catholics.

This is good to hear.

There are many more converts, some of us lesser know. When I was considering the move, after much reading and research, I saw the news piece about your conversion and I bookmarked it as something I may share with my family.

My partner, Webster Bull and I are blogging about our experience at "Why I Am Catholic" with a url of yimc.blogspot.com

We are a family of converts and I am a former protestant minister.

Recently our eldest daughter, early 20s, ask how is it that many people read and research and dancing and considering around he edges of the fullness of the faith for years and yet do not enter the Catholic Church while others seriously consider the faith and enter it in a relatively short time?

My only answer was and is, it is an act of Grace. This may sound ironic to a protestant but there it is. And as another commenter said, it takes a great deal of humility. Yes and I would add, it requires a certain amount of abandonment to the divine will.

Thanks for sharing this great news.

There are a number of active posts regarding some of these historical issues going on at my BLOG - I'd love to see you guys jump in.

And Jeff, since I did not write, nor imply, the category of "well-known Catholics at a similar level previously faithful to the Church," I hardly think it's fair to call my statement a cop-out. Betancourt himself is not at "a similar level" either, and you were quite happy to hear of his move.

Praise God!!
this brings us one step closer to Christ's prayer 'Let them be one.'(John17:11)

I suppose I would like more concrete information on Betancourt. If that is the news that is fine and we may see more of it soon. I thought the book raised many good points although not perfect. Geisler's other work "Roman Catholics and Evangelicals Agreements and Differences" was thorough and many of the arguments I have asked some fine Catholic Apologists (Like Father Rocky on Relevant Radio, or even searching Scott Hahns Work) that give good answers, but even they are lacking at times. We should give credit where credit is due and I think even the author's of this blog (Mr. Beckwith) has benefited from the work of Geisler or been grateful. Your book "To Everyone an Answer" comes to mind. I think at times Catholic Apologetic's as fine as it is on some points could really benefit by admitting its weaker points.