The apostolate of St. Francis De Sales: Apostle to the Reformed 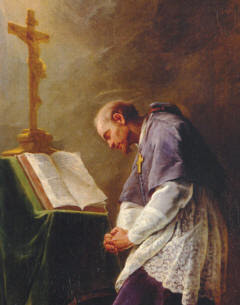 Over at Called to Communion, Matt Yonke has published this brief, though insightful, essay:

Few figures loom as large in the history of Calvinism, and yet are at the same time so unknown by Calvinists, as St. Francis De Sales.

St. Francis, born in 1567 to a wealthy family, led an interesting life, the details of which are too great to expound here, but I recommend the Catholic Encyclopedia article on his life for a good recounting of the details.

For our purposes, the most important aspect of Francis’ life and ministry was his mission to convert the Calvinists of Geneva. In 1594, a young priest at the age of 27, he volunteered to evangelize the Calvinists there.

Francis’ ministry was not well received by the Calvinists at first. In fact, most of them wouldn’t even talk to him. As such, Francis turned to the tactic of writing pamphlets that he would slip under the door of the people of the town. These tracts were later collected into a book called The Catholic Controversy that can be read in its entirety at the preceding link. Of course, what passed for a tract in those days is much more like what we would call a scholarly essay, so the book is a very meaty examination of the problems that separate Calvinists and Catholics.

Little by little, Francis gained himself a hearing among the Calvinists and eventually converted them by the thousands. His success was so great that he was later elevated to the post of Bishop of Geneva.

I have found it interesting how many converts to Catholicism from the Reformed faith have found De Sales work so compelling, even to this day. Speaking for myself, his chapter on the concept of the mission of ministers of God was one of the turning points in my own conversion.

I hope our Reformed brothers will give a hearing to this very holy man of God whose work resonates down through the centuries.

Email ThisBlogThis!Share to TwitterShare to FacebookShare to Pinterest
Labels: Protestantism