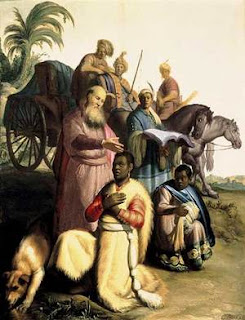 (An entry in celebration of Black History Month)

In an article entitled, "Black Saints in the Universal Church: That's Nothing New," Dr. Camille Brown, principal of St. Cyprian School in Philadelphia, offers a nice historical account of Catholic saints of African descent. Here are some excerpts:

The act of being raised to great holiness by the Catholic church is a magnificent and awe inspiring event for the Universal church and for everyone connected to the newly-made saint. For centuries, the Catholic church has raised many individuals and groups to this level of holiness. Black Catholics have been among these saints. But, how is this possible if Black people have just recently turned to the Universal church? To answer this question, let us consider the beginning of our church.

In Acts 8: 26-40, we learn that Philip encountered an Ethiopian Eunuch. This unnamed Eunuch is " a court official of the Candace, that is, the queen of the Ethiopians, in charge of her entire treasury". He must be an important and influential man as he occupies such a high office in Ethiopia. Often, we browse over this text without thinking that Ethiopia is on the African Continent. This is significant because the Eunuch returned to his homeland with the faith. Acts tells us that "he continued on his way rejoicing". This is evidence that our Catholic faith existed in Africa as early as the first century....

As long time members of the Catholic Church, Black Catholics have become saints. In fact, over the last nine years since I been teaching college level courses, I have an accumulated research count of 701 Black Catholic Saints. Saint Josephine Bakhita from the Sudan made 701 in 2000. While keeping a running total, I have also realized that many saints were unnamed as groups were martyred and no records of names remain( for example, the Martyrs of Alexandria in 261 A.D. and Saint Maurice of Aganaum and Companions around 237 A.D.) The Martyrs of Alexandria were canonized due to their heroic virtue of assisting plague victims and burying the dead. There were no miracles, only countless acts of bravery as Christians in hiding risked their lives by coming to the aid of those affected by the plague. In Aganaum, St. Maurice and his companions(6,000 soldiers ) were martyred by Emperor Maximian as they refused to sacrifice to the Roman gods. These are just a few examples of the many unnamed saints. These have not been included in the 701 tally. This total only reflects specifically named individuals who can be identified with their approximate dates of martyrdom.

You can read the whole article, beginning here.
Posted by Francis Beckwith at Tuesday, February 02, 2010