Politics for Christians has been released 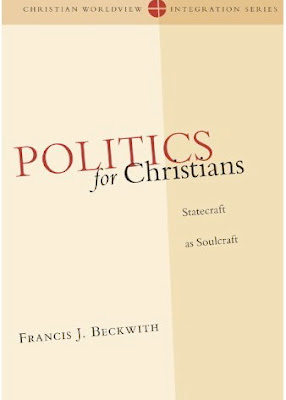 InterVarsity Press has just released my latest book, Politics for Christians: Statecraft as Soulcraft. It is one of several books in a series for which my friend J. P. Moreland and I are general editors. It is called the Christian Worldview Integration Series and you can read about it on the IVP site. Here are my book's opening paragraphs:


"Politics” is derived from the Greek word for city, polis. The study of politics is, therefore, an attempt to understand “the city,” the inner workings of a community and the way by which it governs itself over time. The governed are called “citizens,” and those who do the governing are part of the government, the entity that makes, enforces and applies the laws. So, students of politics must concern themselves with knowing what it means to be a citizen as well as whether the government under which these citizens live is just or unjust. Because the Christian tradition—both in its Scripture and in the writings of its great teachers—has addressed questions pertaining to citizenship and the administration of justice, Christian students of politics have a reservoir of wisdom at their disposal.


The primary purpose of this book is to introduce the Christian student to the study of politics. I pay particular attention to addressing the legitimate concern of many citizens that religious citizens, including Christian ones, should set aside their beliefs before they enter the public square. I also hope to provide the Christian student with an account of politics and government that includes an understanding and appreciation of liberal democracy that is not hostile to Christian participation and the shaping of public policy.

Too often the study of politics from a Christian perspective comes across as politics plus the Bible, as if Scripture is the entirety of Christian thinking and that it is a mere afterthought that contributes nothing to our knowledge of politics. What I mean by this is that oftentimes Christians treat the Bible as a collection of proof-texts that simply serve to confirm in their minds what they already believe on other grounds. So, for example, conservative Christians “find” free markets in the Scripture, while liberal Christians “find” the welfare state. And rarely do such Christians entertain the possibility that their reading of Scripture is colored by certain assumptions about the human person, property and freedom that are completely alien to the biblical worldview. I offer this book, though only an introduction, as a correction to this approach to Christianity and politics. That is, if Christians believe that Christianity is true in all that it affirms about human beings, justice, the good life, and the kindness and love owed to non-Christian neighbors, then any politics that does not take into consideration these truths will never be complete. Of course, in a sense, given fallen human nature, no political system or government is ever really complete this side of eternity. For this reason, Christians must strive to be humble and teachable and to nurture in their souls the Christian virtues as they offer their claims to a world that in some of its locales grown increasingly unreceptive to Christianity and what it affirms.

You can purchase the book at Amazon.com here. The publisher's page for the book is here.
Posted by Francis Beckwith at Friday, February 19, 2010

Email ThisBlogThis!Share to TwitterShare to FacebookShare to Pinterest
Labels: Church and State, politics, Politics for Christians