Louis Bouyer on the Reformation 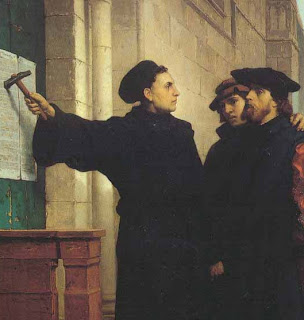 Three days before Reformation Day (October 31), I bring to your attention one of my favorite essays, penned by the president of Ignatius Press, Mark Brumley. Entitled, "Why Only Catholicism Can Make Protestantism Work: Louis Bouyer on the Reformation," Brumley writes:

Interpreting the Reformation is complicated business. But like many complicated things, it can be simplified sufficiently well that even non-experts can get the gist of it. Here's what seems a fairly accurate but simplified summary of the issue: The break between Catholics and Protestants was either a tragic necessity (to use Jaroslav Pelikan's expression) or it was tragic because unnecessary.

Many Protestants see the Catholic/Protestant split as a tragic necessity, although the staunchly anti-Catholic kind of Protestant often sees nothing tragic about it. Or if he does, the tragedy is that there ever was such a thing as the Roman Catholic Church that the Reformers had to separate from. His motto is "Come out from among them" and five centuries of Christian disunity has done nothing to cool his anti-Roman fervor.

Yet for most Protestants, even for most conservative Protestants, this is not so. They believe God "raised up" Luther and the other Reformers to restore the Gospel in its purity. They regret that this required a break with Roman Catholics (hence the tragedy) but fidelity to Christ, on their view, demanded it (hence the necessity).

Catholics agree with their more agreeable Protestant brethren that the sixteenth century division among Christians was tragic. But most Catholics who think about it also see it as unnecessary. At least unnecessary in the sense that what Catholics might regard as genuine issues raised by the Reformers could, on the Catholic view, have been addressed without the tragedy of dividing Christendom.

You can read the whole thing here.
Posted by Francis Beckwith at Wednesday, October 27, 2010