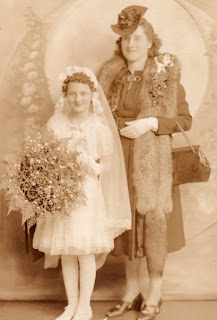 Tomorrow, November 9, would have been the 100th birthday of my maternal grandmother, Frances Guido, who died in 2002. (To the right is a picture of her in the 1930s when she served as her niece's sponsor for Confirmation. Below is a picture of my Grandmother and my sister, Lizzie, from the early 1980s, standing on the stoop of my Grandma's Brooklyn home). In Return to Rome, I write about my Grandmother and the years I lived with her (1984-1987) while I was studying for my PhD at Fordham University. Here is an excerpt from that portion of the book:

So in late August 1984 I moved to New York City to attend Fordham, located in the Bronx. I lived in the Cypress Hills section of Brooklyn with my maternal grandmother, Frances Guido, an Italian-American and devout Catholic whose parents emigrated from Sicily at the turn of the century. Born in 1913 (d. 2002), my grandmother was an amazing woman. She lost her husband (my grandfather) to stomach cancer in 1952. Widowed at the age of thirty-eight, she worked as a seamstress and provided each of her four children with twelve years of Catholic-school education.

I once asked my grandmother why she never remarried. Her answer initially seemed stunning to me, though, given her beliefs and convictions, it made perfect sense. She said, “How can I bring a strange man into a home with two young daughters?” What an amazing (and politically incorrect) answer. Her first thought was not of herself and what she should have wanted. It was

about what advanced the common good, and in this case, the good of her family and her young children. What my grandmother’s understanding manifested was the incarnational faith of which Jesus spoke when he told his disciples that “whoever would save his life will lose it; and whoever loses his life for my sake and the gospel’s will save it.” (Mark 8:35)

Living with my grandmother was an incredible experience. She exhibited the love of Christ in everything she did, even when she was angry with me for having a messy bedroom. One time, for instance, while cleaning the house, she said, “You know, Lincoln freed the slaves.” I answered, “But not the Italian ones,” at which she laughed and said that just because I was funny didn’t mean she wasn’t mad.

My grandmother’s charity seemed boundless. For example, in 1974, while my younger brother James and I were spending a month of that summer at my grandmother’s apartment in Brooklyn, our mother called and told us that one of my eighth grade classmates was in a hospital in Manhattan receiving treatment for a

cancerous tumor that was found in his upper leg. We had tickets to a New York Mets game for the next day. My grandmother suggested that after the game we go visit him in the hospital and bring a baseball to him as a gift. So, we did. During the visit my grandmother met his mother, Louise. They quickly became friends. Within weeks my grandmother had convinced Louise that she should stay at my grandmother’s apartment whenever her son had to be in New York for treatments. For the next several years, my grandmother opened her home and her heart to my classmate’s family as they suffered through his cancer and his death, as well as those of his father and two sisters. My grandmother, who had been widowed in 1952, knew the heartache of an untimely death and the trials that accompany it. Her compassion, her willingness to “suffer with” others, truly revealed the spirit of Christ that worked in her heart. I must confess, however, that it is only in retrospect that I have come to appreciate how her example left an indelible mark on so many of those with whom she came in contact, including me, her eldest grandchild.

She went to Mass every morning and was involved with many works of mercy at her parish. Whenever there was sickness, death, or heartache among her friends or family, she was there, prepared to cook, clean, say the rosary, or just listen. We were always hosting dinners or lunches with family and friends, or else traveling via subway, bus, or automobile to visit aunts, uncles, cousins, or other relatives whose genetic connection to me I’m still not sure about.

My grandmother kept her mind alert by reading, doing crossword puzzles every night, and arguing with me about politics. She was a Franklin Roosevelt Democrat,and I was a Ronald Reagan Republican. Our bantering was always friendly, but mischievous. Whenever there was a negative story in the newspaper or on television, no matter how distant or obscure, for which she could blame President Reagan, she made sure I knew about it. On the November night that President Reagan was re-elected in 1984, with a 49-state landslide, my grandma graciously conceded defeat and congratulated Reagan for his triumph, though she did go on to say that Reagan was a better actor than a president and he wasn’t even a good actor. I respectfully did not take the bait.

Eternal rest grant unto her, O Lord, and let perpetual light shine upon her. May she rest in peace. Amen.
Posted by Francis Beckwith at Friday, November 08, 2013