My new book, Taking Rites Seriously: Law, Politics, and the Reasonableness of Faith

Just in time for the Holidays, Cambridge University Press has released my latest book, Taking Rites Seriously: Law, Politics, and the Reasonableness of Faith. To learn more about the book, you can go to its website, takingritesseriously.com . On that site, you can read the book's introduction, peruse its table of contents, and read the publisher's summary, which states: 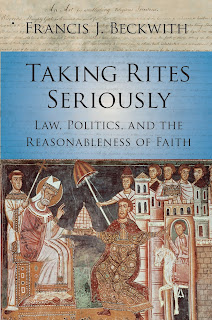 Taking Rites Seriously is about how religious beliefs and religious believers are assessed by judges and legal scholars and are sometimes mischaracterized and misunderstood by those who are critical of the influence of religion in politics or in the formation of law. Covering three general topics – reason and motive, dignity and personhood, nature and sex – philosopher and legal theorist Francis J. Beckwith carefully addresses several contentious legal and cultural questions over which religious and non-religious citizens often disagree: the rationality of religious belief, religiously motivated legislation, human dignity in bioethics, abortion and embryonic stem cell research, reproductive rights and religious liberty, evolutionary theory, and the nature of marriage. In the process, he responds to some well-known critics of public faith – including Brian Leiter, Steven Pinker, Suzanna Sherry, Ronald Dworkin, John Rawls, and Richard Dawkins – as well as to some religiously conservative critics of secularism such as the advocates for intelligent design.

Given the ongoing and increasing disputes in our culture about religious liberty, religious beliefs, and their attendant notions (such as metaphysical and moral beliefs),  the release of this book has turned out to be quite timely, even though I had been working on it since late 2008.

You can purchase it at amazon.com.
Posted by Francis Beckwith at Tuesday, December 15, 2015