Yesterday, February 4, Cambridge University Press released the UK/European edition of my new book, Taking Rites Seriously: Law, Politics, and the Reasonableness of Faith.  Here's a brief description of the book from the publisher: 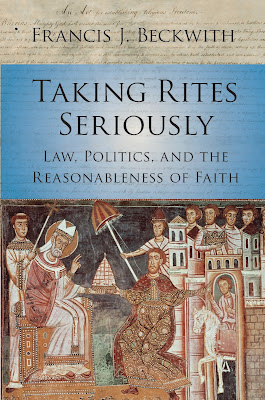 by judges and legal scholars and are sometimes mischaracterized and misunderstood by those who are critical of the influence of religion in politics or in the formation of law. Covering three general topics – reason and motive, dignity and personhood, nature and sex – philosopher and legal theorist Francis J. Beckwith carefully addresses several contentious legal and cultural questions over which religious and non-religious citizens often disagree: the rationality of religious belief, religiously motivated legislation, human dignity in bioethics, abortion and embryonic stem cell research, reproductive rights and religious liberty, evolutionary theory, and the nature of marriage. In the process, he responds to some well-known critics of public faith – including Brian Leiter, Steven Pinker, Suzanna Sherry, Ronald Dworkin, John Rawls, and Richard Dawkins – as well as to some religiously conservative critics of secularism such as the advocates for intelligent design

If you want to read more about the book--including the table of contents and an excerpt, go to the book's website takingritesseriously.com.
Posted by Francis Beckwith at Friday, February 05, 2016