"Carl Henry's Quandary" is the title of the article I contributed to the Fall 2015 issue of the Journal of Christian Legal Thought (JCLS), which was just recently released online. The issue is devoted to assessing a mid-1960s private disagreement between the late Evangelical theologian, Carl F. H. Henry, and the future president of Fuller Theological Seminary, the philosopher Richard Mouw.  The disagreement arose over an article that Henry and commissioned Mouw to write for Christianity Today, where Henry served as editor at the time. As the JCLT special issue editor, Thaddeus Williams, describes it in the opening article:


Mouw wanted to rouse the dosing church in America to engage the social evils of the day with more political clarity and verve....Henry...offered Mouw an instructive critique. According to Henry, individual Christians may engage the political process by endorsing specific policies; whereas the church as an institution should stick to declaring the general principles of a biblical worldview as they relate to socio-political issues, while stopping short of explicit public policy endorsements. For Henry, the institutional church 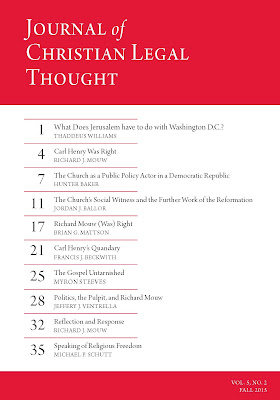 can and should voice negative verdicts on bad policies, but lacks the “mandate, jurisdiction, or competence to endorse political legislation or military tactics or economic specifics in the name of Christ.”

Mouw “grudgingly accepted what [he] considered a less-than-fully satisfactory compromise arrangement,” while remaining convinced that “the church could rightly say a bold ‘yes’ to specific policy-like solutions.” Forty-three years later all of that would change. In January of 2010, Christianity Today [CT] published Mouw’s updated reflections under the humble and candid title, “Carl Henry Was Right.” Why did Mouw, over the course of four decades, come to side with Henry in placing specific policy endorsements beyond the purview of the institutional church’s mission and mandate? Was Carl Henry right? [notes omitted]


In the private dispute between the young philosopher Richard Mouw and the seasoned theologian Carl F. H. Henry, I concur with the retrospective judgment of the President Emeritus of Fuller Seminary. Understanding the difficulty (not to mention the imprudence) of offering particular policy proposals as the only deliverances of Christian moral theology based on principles that are at a much higher level of generality, Henry exercised a wisdom that is far too uncommon today.

Henry’s position is not unlike the one advanced by the Catholic Church over the past century in its many encyclicals on social, moral, and political issues. Rather than employing the categories of contemporary political thought—e.g., right, left, liberal, conservative—or explicitly endorsing specific policies or forms of government, the Church has offered an account of the human person that is grounded in certain principles of justice, which it maintains are derived from Scripture. Take, for example, St. Pope John Paul II’s 1995 encyclical, Evangelium Vitae. The late pontiff presents a case for the sanctity of human life and the role that governments and communities should have in protecting it. Although his case is biblical, insofar as he relies on extensive citations of Scripture, it is also philosophical and theological, insofar as he reads the Scripture through the principles and categories that the contemporary Church has inherited from its predecessors

When responding to the contemporary challenges of abortion, euthanasia, and capital punishment, the late pontiff does not merely comb the Bible to find passages that directly address these challenges. (This, of course, would be a fool’s errand, since these topics, except for the death penalty, are not specifically mentioned in the Bible, though even in the case of capital punishment the question of whether its use in the modern world is permissible—a question addressed by the encyclical—is clearly not dealt with in Scripture). Rather, St. Pope John Paul II reads the Bible as the Church has read it from its earliest days, and thus imparts to his flock the philosophical and theological principles that the Church had always believed were embedded in the text. Thus, what the Scripture teaches us about the nature of man (theological anthropology) and its proper ends are not normative beliefs that one can discover by merely reading the Bible in an ahistorical fashion, detached as it were from the first and subsequent readers of the sacred text. [notes omitted]

You can read the whole issue here.
Posted by Francis Beckwith at Thursday, February 04, 2016